Following concerns in the community about speeding, Mary Tavy Parish Council have installed a vehicle activated sign on the A386 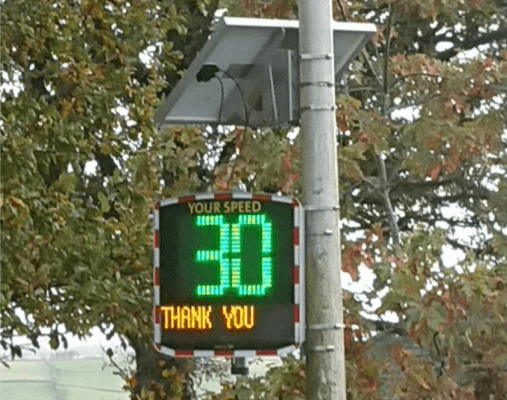 The council wanted to address the issue of speeding vehicles on the A386, a busy road in the centre of the village. Several residents had contacted the parish council with concerns regarding vehicle speeds on the road which doesn’t have a pavement all the way along. Some parts of the A386 have a virtual footpath rather than an actual pavement and residents that needed to use the virtual footpath felt vulnerable.

A formal public meeting was held (before the Covid-19 pandemic) and was well attended. Parishioners were presented with a series of solutions to the problem including:

Residents largely agreed that the parish council purchase a mobile VAS. The aspect that appealed most was that a modern VAS could both display vehicle speeds as well as collecting data. The data can be fed regularly to authorities such as Devon County Council and Devon & Cornwall Police as evidence of the speeding problem in the village.

Once an appropriate make and model of VAS had been decided by the council, they made contact with the Neighbourhood Highways Officer to outline the proposal. As part of the process, the council had to supply a map of potential locations on the A386 for placement of a mobile VAS. The process of gaining approval was very time consuming; it took almost two years to gain the necessary permission from the highways authority to erect a VAS on the A386 despite assurances from the parish council that they would purchase the VAS solely from its own funds, would conduct its own risk assessment, and be solely responsible for maintenance and insurance.

They got there in the end and received permission to erect a VAS at a couple of approved locations on the A386. It was then the clerk’s task to identify the relevant power to purchase and erect a VAS. They knew that they could use section 137(2) of the Local Government Act 1972 but that would use about a third of the council’s section 137 expenditure allowance for the financial year.

The parish council contacted DALC, requesting advice from NALC’s legal team (a free member service) on possible powers. Three possible powers that the council were considering were ruled out:

Now the VAS is up and running perfectly and the council has signed documents to show the internal auditor with reference to the power to purchase and install a VAS without touching their section 137 expenditure allowance for the financial year.

Our advice service is available to all our members and, amongst many other things, can help with identifying powers for a council to carry out a service or function. Please just contact us for assistance and we’re happy to help!